January is a good time of year to start plants in Chennai. The weather is as pleasant as can be. The sun shines brightly, but doesn't scorch the plants. This year, the temperatures touched a ten-year low in Jan, for which I'm very happy as I'd planted some carrots for the first time. Carrots here, are among the exotic "hill vegetables", (since we get all our carrots from the surrounding, cooler hills.) While the seeds sprouted in less than a week and have been growing steadily since, I'm keeping my fingers crossed. It's too early to say whether my carrots will actually grow in Chennai's "cold" weather.
Now in Feb, many of the seeds sown last month have transformed into sturdy little seedlings. Here are some photos. My earlier basil bush was overgrown, so I decided to start it from seed once more. Basil is so easy to grow here that starting from seed is much easier than re-potting and pruning an old bush.
Last year's spinach went to seed after several wonderful harvests. So this year, I intend to invest in some more spinach. While I had nearly 100% germination success with the seeds, many of the seedlings have been trampled upon by squirrels and crows. The crows come to peck at pieces of egg shells that are part of the compost.
The bell pepper plants look like strange chilly plants. The leaves don't seem too well. Perhaps it's because I've done something that is strongly discouraged. The capsicum seeds weren't bought, but saved from a capsicum that I got from the market. The capsicum was yellow-red and probably hybrid. Since it seems near impossible to get yellow and red bell pepper seeds from anywhere near my place, I was left with no better option. But seeds from hybrid plants yield poorly. I am just hoping that they will at least yield a couple of capsicums. 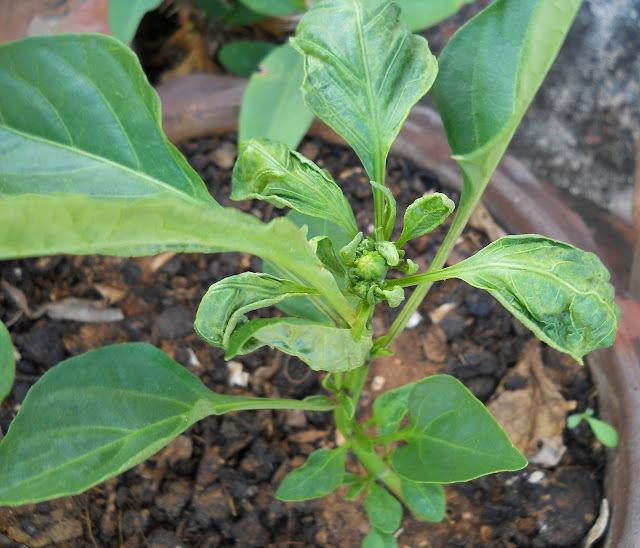 The curry leaf tree and the lemon tree (both in pots) are showing a lot of promise. Many tender green leaves have sprouted all over.
Lots of suspense at the Tube Rose (Rajnigandha) plant. Buds have been growing a little bigger each day, for nearly two weeks now, but it is yet to flower.
While my other zinnias are beginning to fade and produce smaller flowers every time, the peach coloured zinnias have just begun to show off. These get lovelier as they age and in fact are in their best colour when they're nearly all dried up.
And just like my garden is making a fresh start, so am I. I've landed a new job after a longish gap. And while I am very happy about the job, it may also mean less blogging. (During the week, I have only just enough time to water my plants). So if you find fewer posts and comments from me, you know the reason.
Posted by Anita Kumar at 09:14 20 comments

What's this Blog About?

Red ripe tomatoes attract birds, beasts and men like no other. Tomatoes were the first fruits from my little green patch that inspired me to grow more veggies and blog about them.

Welcome to my blog!

Here you'll find my notes on urban nature: the little pleasures I find in my garden, the birds from my window and of course, homegrown tomatoes.